Amazo may or may not have the best name, or the best look of any Justice League villain, but his capacity to duplicate and use the powers and abilities of the Leaguers against them is pretty formidable.

Posted here is the Young Justice version, who can only duplicate the power profiles of one copied opponent at a time. 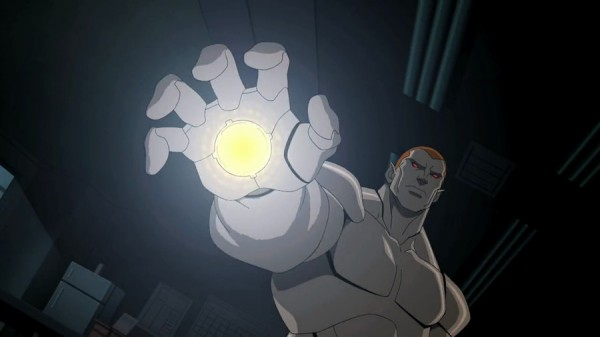 High Concept: Power-mimicking android weapon
Trouble: The abilities of anyone he views, one at a time
Other: Made for easy disassembly; Follows Ivo’s orders; Loading profile....
+5 Forceful
+4 Quick, Flashy
+3 Careful, Quick
+2 Clever
- Since he is an Adaptive Android, Amazo can duplicate any Aspect and/or Approach of anyone he has had the opportunity to view in action once per exchange (limited to the bonus of the viewed Approach or his maximum approach, whatever is lowest).
- As your Powers are Mine Now, Amazo gains +2 to Forcefully Create an Advantage using duplicated powers and abilities in physical combat.
- Since he is a Valued Creation, once per session Amazo can call upon Professor Ivo’s aid, even after he has been Taken Out,
Consequences:

Amazo is designed to resemble a tall, muscular barechested human man. However, the resemblance is not perfect; for example, it has pointed ears, and lacks eyebrows or nipples. Its face is stern, with chiseled cheeks, a square jaw, and a narrow, aquiline nose.

Most of Amazo's outer surface is formed from untextured metallic segments with visible joints and edges. The segments resembling exposed skin (its face, arms, neck and chest) are pale gray; the crown of its head is orange to imitate close-cropped hair; segments resembling clothing (its legs and bands around its wrists) are colored dark green. Its eyes are red, and sometimes glow.

Amazo has the ability to study and mimic the abilities (though not the weaknesses) of his enemies.

During his battle against the Justice League, he replicated the powers of several heroes: