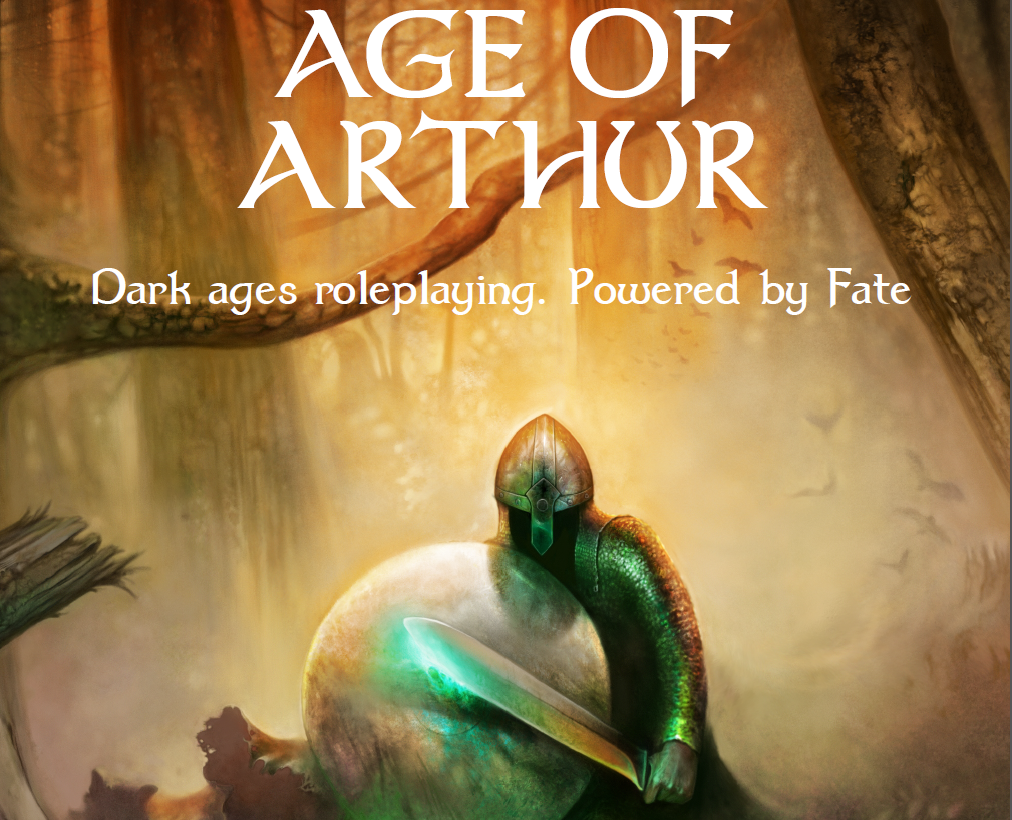 This is part 2 of our series reviewing Age of Arthur, and you can read Part 1 here.

One of the more intriguing crunchy bits in the Age of Arthur core rulebook are the rules for mass combat. Chapter 8: Battle provides a breakdown on how to run mass combat on a variety of scales, and allows for the players to have significant individual impact on the outcome. The chapter details four separate steps in running these battles, as well as a wonderfully flavorful example.

ARMIES
Each army is assigned a skill level, from 1-4, as well as a stress score based on its size. Each army has some sort of commander; who influences the army's dicerolls based on his/her Strategy And Tactics and Leadership scores. If one is higher than the army's skill the commander grants a permanent +1 bonus; if both are higher, that bonus is +2. Given the power of +1 or +2 to skill checks in FATE, this is very powerful, and really dives home the idea of an army as an extension of its leader. In addition, each army has a number of aspects assigned to it; these can be anything from a descriptor of the army itself to an aspect describing its role in the combat.

PRELIMINARIES
This section details the events that can occur leading up to the battle. The preliminaries listed are:

Manoeuvring
A successful opposed check by the commanders nets adds another aspect on the successor's army reflecting some tactical movement, such as Pinned Against The River, or Cut Off From Supply Lines.

Magic
If both armies have magic-wielding individuals on their side, they can make an opposed check to grant their armies another aspect, such as Favored By Belenus, or Posessed By Wolf Spirits. The rules do not speak to a scenario in which one magic-wielder goes against an army without one, but substituting the opposing commander with a penalty to his/her roll might suffice. The rules do, however, address having more than one magician on each side.

Champions*
This preliminary might be my favorite! It allows for an individual to call out an opponent into a Hero Duel, allowing yet another Aspect to be granted to his or her army. The rules speak to using more than one champion for Hero Duels as well. It seems to me this can also be re-skinned to allow for smaller groups of individuals to perform tactical functions separate from the main army as well. For example, we have two armies of 2000 soldiers each. The Commander of one army tasks 50 of his best rangers to sneak past the opponent's picket lines in the night and set fire to their supply tents, thus granting the aspect Hungry And Tired. You could have the heroes undergo some kind of Druidic ceremony taking them into the fae realm via dreams to influence the battle, or any number of unique scenarios with this step.

Other Factors
Here the designers address the effects of weather and fortifications; such rules could be easily customized to account for disease, local resistance, and political entanglements.

THE BATTLE
Now the carnage begins! Individual Heroics and Getting Personal both speak to using your heroes as they fight midst the throng, spending fate points and with individual skills tests, including one hero many foes. Each army then attacks, with the smaller one acting first. Successes are inflicted upon the opposing army's stress score. A draw does no damage, but allows each side to place a new aspect on the field, which can be tagged by a Commander by spending a fate point. Turns go by, and the battle ends when one side is reduced to 0 stress, which can be a slaughter, a retreat, a surrender, or any other outcome the story necessitates. In addition, there are rules for a side to withdraw or surrender before falling to 0 stress.

The Aftermath
At this point, you assess the losses for each side, and the leaders of each army can make a Leadership check to try and recover some of the army's strength. Player characters must make an check to see if they were wounded in the battle, modified by the success (or lack there of) of the army he/she fought in, and takes the appropriate damage.

Example
The last section in the chapter walks through the above steps, in an evocative combat between a horde of Angles attempting to defeat a fortified smaller Brythonic group defending a town. This example goes a long way towards showing how easy and cinematic the mass combat rules can be.

Inspired by this chapter, I designed my character for Mike's game as just such a battle commander. High Concept: Devout Brythonic Veteran Battle Captain
Trouble: I've Seen One Campaign Too Many
Other: There’s Wisdom In The Old Tales
Oaths: I Pledge My Life To Protect Britannia From The Invaders

Stunts:
Many Tongues: The character knows twice as many extra languages or alphabets as his level in the Languages skill would normally allow.

Planned Assault: When you make a successful Tactics check (default opposition Fair [+2]) you may add +1 to the first action in combat to all allies in visual or audible range. This ability may also be applied in Mass Combat circumstances.

Know Your Enemy: Once per session, you may automatically Create an Advantage in combat related to a weakness for the opposition.

Background:
Decimus Axius Aquila was a minor government accountant of Roman lineage from Din Eidyn, the capitol of Goddodin. The book describes Gododdin as the most powerful of the northern British Kingdoms. Lying between the Walls of Antonine and Hadrian, it was never fully conquered by the Romans. For much of its history it was a Roman ally. The great Welsh leader, Cunedda Wledig was part of the royal house of Gododdin. By tradition, the kings of Gododdin spend time in each of the main settlements of the kingdom. The largest settlement, the town of Din Eidyn (which corresponds to modern Edinburgh) is where the current king, Lot ap Luwddoc, spends most of his time. The people of Gododdin are British rather than Pict, though King Lot is half Pict, through his mother, a princess of Orkney. He rules both the Kingdom of Gododdin and the Kingdom of Orkney. In order to make peace with Lot, High King Ambtosius Aurelianus arranged a marriage between Lot and his niece, Morgan Le Fay. However, under Pictish law, such things as royal rule pass through the female line and more usually through a niece than a daughter. Morgan Le Fay feels she has a good claim to be High Queen of Britain now that Ambrosius Aurelianus and her father Uther are dead and King Lot desires to be High King. The people of Gododdin and many Picts support this claim.

Decimus Axius Aquila was a student of history and lore, and had a great love of languages. His notable Roman nose earned him the epithet of Auila (Eagle). While on a trip to assess taxes in the countryside, he met a beautiful young woman named Caoilfhionn, the daughter of a druid.

After his tour was complete, he sold his holdings, bought a rural farm, and married Caoilfhionn. She was as smart as he, and steeped in the lore of Brittany. They had many children, the youngest of which they named Amaethon, after the legendary hero of myth. True to his namesake, he dreamed of being a hero himself, and come harvest-time, wielded his scythe to cut down stalks of wheat, pretending they were the enemies of legend. He took after both his father and mother- inheriting the former’s aptitude for language and the latter’s love of his native mythology.

When old enough, he became a soldier and fought in many battles. He fought for and against many ‘kings’, and earned a reputation as a formidable strategist and tactician.

While fighting for a minor lord, Owynn ap Powys, he fell in love with his daughter, Nolwenn, who bore him a single son before dying of Phthisis ten years later. Amaethon's son, Bran, then accompanied him on his campaigns and grew into a formidable warrior himself.

Amaethon fought alongside Vortigern, who hired the Germanic mercenaries Hengist and Horsa to repel the Angles. They betrayed the army, ensuring its utter defeat, and Vortigern was marked as a traitor. After this incident, Amaethon realized that in-fighting against the Britton kings was pointless, and vowed to protect the lands and culture he loved from the invaders. Now he fights against the Angles and Saxons with his trusted companion and adviser: Aedan Mordha, warrior Druid and defender of the old gods!

*This system is absolutely perfect for running the battles in the Iliad; has no one done a Homeric Cycle hack for FATE yet?